Interview with Mark Nicks of 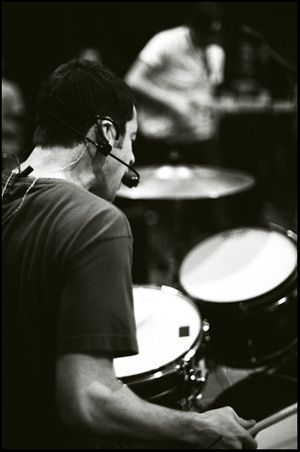 After seeing the Nashville version of their album debut, I recently talked by phone with Mark Nicks of Cool Hand Luke. After chatting for a few minutes about life in Nashville where we both live, we dove right in..........

So Mark, I got the new album and as I was reading the

liner notes, I couldn't find any song writing credits. Can you explain that and tell me a little about the song writing process for Cool Hand Luke? Mark: We attribute our song to God. It is a spiritual thing, we usually say God writes our songs. The three of us get together and things just start to happen. The new record is a little different because I started playing piano. I brought in full song structures and we went from there. I write the lyrics as well. As far as the songwriting credits, it just seems very prideful to say that I or Brandon, or Chris wrote this song. Your music seems a lot different than most music out there today; where do you draw your sound from and what influences your writing? Mark: There is a lot that influences me that you probably have not heard (with a laugh),but a short list would be: Sigur Ros, Radiohead, Coldplay and film scores. I am very influenced by film scores and classical music. As far as our sound, it is constantly evolving, we are still not where we're going to be. We used to be a lot heavier, but I think we have grown up. At first we felt we had a lot to prove, as we have grown, we have paid more attention to the songs than our parts. Our thought is to try to be thought provoking. A lot of Christian artists have taken their music out of the CCM market into mainstream, is that a goal for CHL? Mark: We just want to play music and make the best art possible, while being honest about what is important. To us, Jesus is most important. We're not trying to make it in any market, just trying to make the best art possible. Your lyrics are very overtly Christian, what do you see as the mission or goal ofCHL, if any? Mark: To spread the passion of the love of Jesus. We would love to spread the Gospel, while being real. There is a reality to Christ that gets lost and we're trying to represent Christ as well as we can. So what's next for CHL?

Mark: We want to tour as much as possible; because we don't really fit in anywhere and we're not that big, people don't seem to want to tour with us. We have approachedsome people and been told no, so we just want to tour. Other than that, we are discussing a worship CD later this year. That would be great, a lot of your music is very worshipful already. What will that CD be like, and what do you think of the recent worship CD craze? Mark: I am really not into the whole idea of worship CDs, it has become just another genre. I don't think there should be a distinction, we're singing to God, and to the body, about God. It's scary to make a worship CD, it can be either good, or really lame. If we do it, it will be something we make on our own, not stock worship songs. If we do songs that are not our own, they will be sacred hymns. We're getting to know our demographic now, and would like to write worship songs that meet them where they are. So we shouldn't look for your version of "I Can Only Imagine" on the worship CD? Mark: Umm, no. The musician in me wondered how you would reproduce the sound of your CD on stage, and you pulled it off very well. How hard was that process? Mark: Well, we knew it was going to be very hard. We have always been a three pieceband, and we knew we were going to have to bring someone in to play piano. Brent Morris is joining us on tour, this was his second show with us, it's been like playing cover songs for him. Are you using any tracks? Mark: No, there are no tracks being used on this tour. Well Mark, thanks so much for taking time out of your evening to talk with me. Mark: No, thank you for your interest.