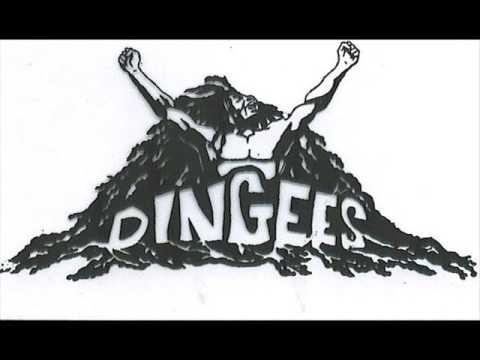 The punk/ska/reggae outfit The Dingees were nice enough to take the time to share their musical influences with us. Here is a list of their most influential and favorite albums.

1. Clash- Clash  after I first heard this album, everything changed. save for a few groups, I never listened to music the same way, or thought of myself being in a band in the same way. They valued different things in different ways when it came down to songwriting, performance and record production. the band's look and wardrobe also grabbed my attention- they were very intentional with it. and I followed (spray-painted) suit. FAVE TRAX: Janie Jones, Remote Control, London's Burning, Police & Thieves

2. The Clash- London Calling  When I first heard this album in 1997, it reeked of an elusive "coolness." I didn't quite know what it was, but I was hooked. I was 19, impressionable... Now that I'm 15 years older the coolness doesn't elude me; I've listened to it and read about it so many times and learned many of the riffs and chord changes. I never thought musicians who reached all over the musical and genre definitions could create a perfect, hybrid that was just ahead of its time. It takes balls to blend multiple influences into something untried and untested. Plenty try and imitate The clash, now more than ever. But it's impossible- they invented their elusive coolness and it's going to stay that way.FAVE TRAX: London Calling, Jimmy Jazz, The Right Profile, Death or Glory, Lovers Rock

3. The Clash- Sandinista I was smoking more weed than ever when this record had its heyday with me. You weren't supposed to finish it in one listen, but then again, we were stoners. This record had many of the same identity, sonic and otherwise, as London Calling, but it seems like the Clash were on a riff, on a roll, totally loosed up. They couldn't put a stop to it. Punch-drunk at a party- perhaps they said too much but they definitely got their point across. FAVE TRAX: Rebel Waltz, Corner Soul, If Music Could Talk, Washington Bullets, Broadway. Kingston Advice, Version City

4. Ragga Jungle Anthems- vol. 1 (compilation)
I first heard this about 2003 or 4, maybe earlier. being a huge reggae fan, reggae from the 70s, I was shocked at how this music which often falls between 70, 80 bpm, could be electrified and seamlessly woven into a pace matching the energy of punk rock. stimulating, in the way walking thru Tokyo at night would overwhelm the senses (which I have never done). FAVE TRAX: Under Mi Sensi (Jungle Spliff) (X Project Remix), You Don't Love Me (No No No) (Ambient Jungle Lick), How the West Was Won, Jungle Down in the Ghetto (Let's Sing It together)

5. Bruce Springsteen- The River  This record is Bruce's 4th with the E Street Band. Also known as the record-following-artists'-first-commercial-breakthrough. What often links these records together is a twist on the previous albums, but with a more sprawling, wide-scope presentation of ideas. I picked this one because it most resembles Sandinista by the Clash- just simply so much music. FAVE TRAX: Hungry Heart, Out on the Street, Cadillac Ranch, Drive all Night

6. The Beatles- Rubber Soul  It never occurred to me that the Beatles imitated anybody. The Beatles- the pillars of creativity and originality. But the Beatles drew from their peers- early Motown and the vocal groups of the early 60s. Like London Calling, you couldn't really create this type of music- and sound original, unless you were so completely absorbed in it that you lost all self-consciousness. FAVE TRAX: Drive My Car, The Word, I'm looking through you, in my life

7. Jimi Hendrix- Electric Ladyland
Even by Jimi's standards, this album goes everywhere. All over the place. It was on of the first CDs I ever bought; I was 14 or 15. Jimi had a voice that was faded, amused and confused. His songs on this one range from a few pop song arrangements, to a shapeless masses that take you on a long rides, with stops, gradual curves and the occasional u-turn in slow motion. And I simply don't have the words to do justice to his guitar playing- read what others have said.
FAVE TRAX: Have You Ever Been to Electric Lady Land?, Crosstown Traffic, Burning of the Midnight Lamp, 1983...A Merman I turn to be, House Burning Down

8. The Beach Boys- Pet Sounds   I read critiques of this album quite a bit when I first listened to Pet Sounds sometime around Y2K. Everything I read was right on; the songs really dug right into me. What's great about it is how pre-rock 'n roll some of the arrangements are. the strings were mic'd 'uncomfortably close,' as I remember a violinist explaining. It's probably the greatest technically recorded album that features songwriting that is equally at its peak. It was my #1 for a very long time. KEY TRAX: Wouldn't it be nice, I'm waiting for the day, Here today, Caroline, No

9. Red Hot Chili Peppers-
Blood Sugar Sex Magik
The RHCP have spawned so many imitators- and they all stink! The band had made albums in the 80s that I won't really listen to. I think one of the keys to its greatness is it seems that the band had finally learned to let loose and breathe, adding empty space to their playing. The album is heavier and rocks harder than their previous ones because of this empty space. Some of the songs have the same unpredictable lyrics from Anthony Kiedis, but the frame is a lot more transparent, and the songs stand out more than all their image and all the fanfare. KEY TRAX: The power of equality, If you have to ask, Suck my kiss, under the bridge

10. The White Stripes- De Stijl   The first white stripes song I heard after a napster search was "hello operator." I felt reluctantly obligated to look into a band that was getting all kinds of praise. What I heard really surprised me, in that I didn't know why they were the "new best thing." Because I thought it was the new best thing. I likened it to journalism- the best way to tell a story is to witness an event, and have a first-hand account. Next best is a second-hand account. What was amazing about the White Stripes is that they were telling a second-hand story from a pre-1950s event. But the music was alive now, or then to me, post Y2K. it sounds remarkable because the music is from another era, but it really doesn't appear that way at all to the uneducated (in musical history, that is)..
KEY TRAX hello operator, little bird, sister do you know my name, a boys best friend

The Good, The Bad and The Queen

The Dingees are a punk/ska/reggae band formed in Orange County, California in the summer of 1996.Albums: Armageddon Massive, Sundown to Midnight, The Crucial Conspiracy, were released on tooth and nail records.The Rebel Soul Sound System, the fourth full length, was home recorded, self produced & independently released free of charge on Jamendo.com The album has been described as reggae rock, refining the bands aesthetic, while remaining true to their roots